Allysha Sliker joined the Browning Law Firm in 2015. Allysha is originally from Fort Pierce, Florida, and is married to Andrew E. Sliker. Through her marriage with Andrew and his military service they have lived in many places including Germany, Texas, Kentucky and Georgia.  After years of military travel, Allysha and her family made Fort Walton Beach their home in 2014, when Andrew began working with the Ranger Battalion on Eglin Air Force Base. 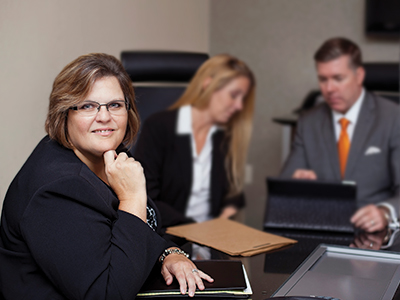 Allysha received her Associate of Arts degree from Georgia State University. She began her paralegal career in 1997, and has since honed her paralegal skills over the years working several areas of law including civil litigation, criminal defense (including capital defenses), bankruptcy, family law, probate and personal injury (including workers compensation law), throughout the Atlanta area and Columbus, Georgia. Allysha also has an invaluable understanding of how to maneuver the intricacies of the Medicare and Medicaid systems. Further, she has experience in law office management, and gained invaluable experience with two firms in Atlanta that handle high-volume civil litigation, personal injury and criminal defense cases. She is highly respected by her peers, and they consider her an expert in various law office software. Allysha has been described by former employers as “extremely bright”.

She has two grown children, Samantha and Bryan, and in her off time enjoys card making, sewing, reading and spending time with her family.

Allysha heads up the personal injury pre-litigation department at the Browning Law firm, and efficaciously assists clients with navigating through the overwhelming mountain of medical documentation and insurance and facility billing associated with automobile accidents.