Paralegal
Connect with me 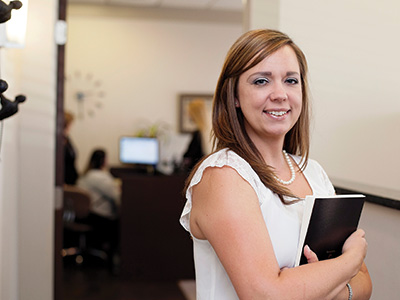 Christy Reeves started her employment at the Browning Law Firm in 2012 as the front desk receptionist. Almost immediately her talents were recognized, and Christy quickly became the “girl-Friday” for everyone in the firm. Throughout her tenure at the firm, she has quickly moved from receptionist, to paralegal assistant, to a work-experience paralegal, through her hard work and perseverance. But Christy did not just start her career in law with our firm. She began working in law firms in the Fort Walton Beach area in 2005. Within two years of her employment at the Browning Law Firm, Christy began handling all of the expunctions for the firm, and today she is Coy’s right-hand woman, handling all of the intricacies of the criminal defense files.

Christy is originally from Fort Walton Beach, and is a graduate of Niceville High School. She attended the general studies coursework at the Okaloosa/Walton Community College (now known as Northwest Florida State College). She has one son, James, and his involvement in the Choctawhatchee Style Marchers makes her one busy band mom. In her time off, Christy enjoys working out, going to the beach, watching movies, going to concerts, spending time with her family, watching Florida State football, and hanging out with her teenage son. Christy can be reached at [email protected].